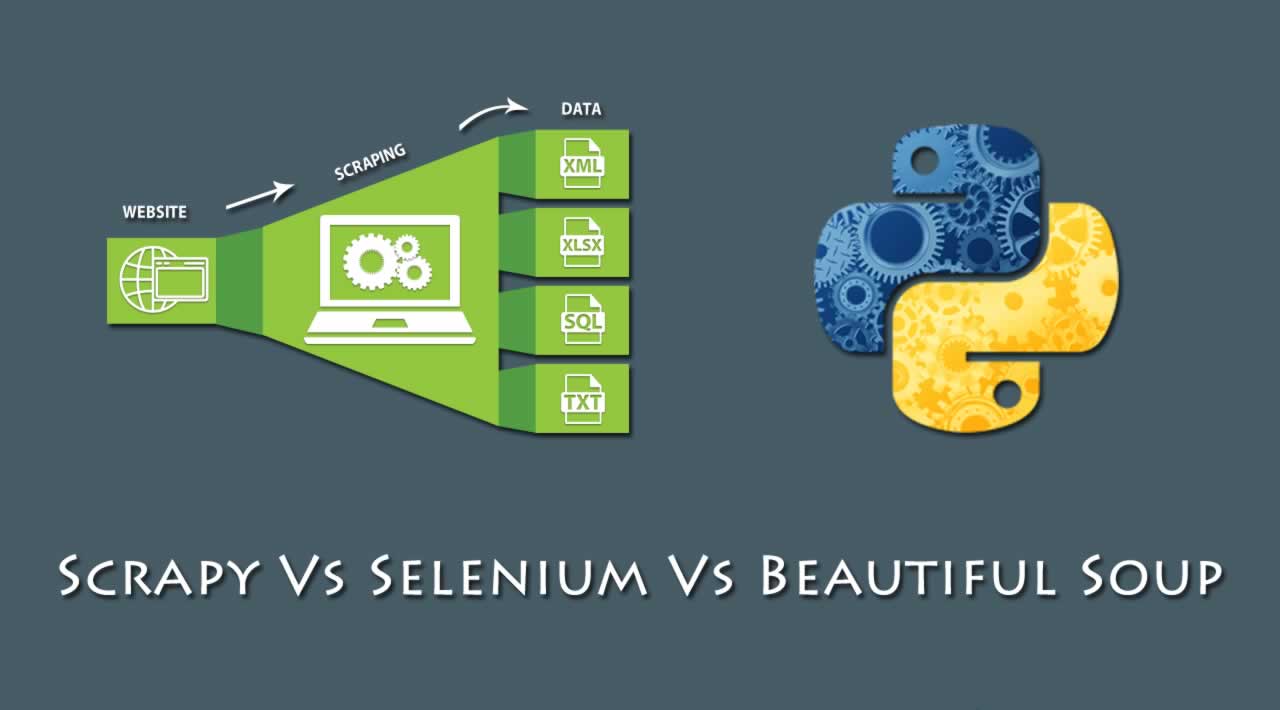 Popular Python Web Scraping Libraries like Beautiful Soup, selenium, and Scrapy have their pros and cons. As nothing in this world is the epitome of perfection similarly to find a complete web scraping library is the main objective of this blog. To explain all the various aspects of each type of Python Web Scraping Library, the blog focuses on the core implementations and working mechanisms of each module and explains what is best suitable for your big or small data extraction projects.

Scrapy was originally published by Sri Manikanta Palakollu. Scrapy is an open-source data extracting data framework in twisted format. Scrapy’s performance is unbelievably fast and is the most efficient web-scraping library out there. Key advantages of Scrapy include an asynchronous networking program and a non-blocking mechanism for sending out user requests.

It supports a portable library written in Python and runs on all Windows, Linux, Mac, BSD.

The library is faster than the existing scraping tools. It extracts data from any website 20 X faster than other libraries.

The library helps to build flexible applications and robust functions for a better data extraction experience.

Scrapy supports a good community of developers however the documentation is not effective for beginners because of no beginner-level documentation.

When we talk about Beautiful Soup, we know that it has a lot to offer to make web scraping more reliable and authentic. With its numerous features, beautiful Soup helps all levels of programmers and developers to pull out data from HTML and XML files. But as we know every perfect thing comes with a cost. The problem with Beautiful Soup is that it does not handle the job on its own. The library requires unique modules to get the work done.

A library requests a website because it is unable to make requests to a server. To resolve this issue help from popular named libraries like *urlib2 and *Requests.

Beautiful Soup is very user-friendly and easy to learn for both beginners and developers.

For Example: To extract all links or URLs from the webpage you can employ the following codes and run actions.

for link in soup.find_all(‘a’): # It helps to find all anchor tag’s

In the above-mentioned code, we employ *html. parser* to parse content from the *html_doc*

The best advantage for developers to use Beautiful Soup is that it caters to efficient and comprehensive documentation.

Beautiful Soup supports a good community to cater to all web scarping issues while working upon the library for both beginners and professional developers.

When it comes to the next Python Web Scraping Library known as Selenium, the first thing to remember is that the library is designed to test automated web applications. It offers an efficient way for professionals developers to write tests in several program languages like Java, Python, Ruby, C#, etc. The framework is specially developed for supporting browser automation.

Let us look at simple code for automating the browser.

From the above-mentioned code, it is concluded that API is a beginner-friendly tool. With its help, you can easily write up codes with the library. This is the ultimate reason for Selenium to become the number one choice in the developer community.

The key features of Selenium include:

The library can accurately handle PJAX and AJAX requests.

When it comes to deciding the best library for performing web scraping operations, there are certain things that one needs to pay attention to. The various factors are listed down for each library separately:

Scrapy: The architecture of this library is very well designed and well organized to help customize middleware to fill in custom functionality at one’s own will. All these features make Scrapy flexible and robust. The biggest advantage of Scrapy is to migrate all existing projects to another one quite simply. If the data projects need data pipelines and proxies then scrappy is relatively a better choice.

Beautiful Soup: While dealing with small projects or low-level complex operations them Beautiful Soup can do all tasks pretty amazingly. The library helps to maintain the code both quite simple and flexible. In case if you are a beginner then you can learn all such features and applications quickly and can perform web scraping at your end to yield the best data extraction results.

Selenium:  While dealing with the Core JavaScript Website, keep in mind that the data size must be relatively limited hence, selenium would perfectly work out for you.

Scrapy: It can solve things descent and quicker due to the various built-in features just like the usage of synchronous calls etc. Existing libraries are not capable to outsmart Scrapy.

Beautiful Soup: Beautiful Soup is slow when it comes to performing certain heavy data tasks. However, the issue can be overcome with the assistance of the Multithreading Concept. Also, the programmer must know the concept of multithreading to get comparable benefits. This the bad part of Beautiful Soup.

Scrapy: The Python Library is potentially good for the ecosystem. It uses VPNs or proxies to automate a task. For complex projects, the best choice is Scrapy to send out multiple requests to the server via multiple proxy addresses.

BeautifulSoup: The library exhibits many dependencies in the ecosystem. The downside of Beautiful Soup is for complex projects only.

Selenium: This Python Web Scraping Library is efficiently good for the development of the ecosystem. However, there still incur certain problems associated with it. Namely, Proxies can’t be utilized very easily without ample background knowledge of the tool.